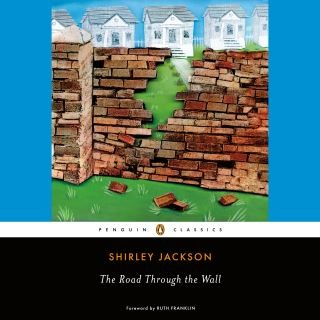 The Road Through the Wall

Pepper Street is a really nice, safe California neighborhood. The houses are tidy and the lawns are neatly mowed. Of course, the country club is close by, and lots of pleasant folks live there. The only problem is they knocked down the wall at the end of the street to make way for a road to a new housing development. Now, that’s not good—it’s just not good at all. Satirically exploring what happens when a smug suburban neighborhood is breached by awful, unavoidable truths, The Road Through the Wall is the tale that launched Shirley Jackson’s heralded career.

For more than seventy years, Penguin has been the leading publisher of classic literature in the English-speaking world. With more than 1,700 titles, Penguin Classics represents a global bookshelf of the best works throughout history and across genres and disciplines. Readers trust the series to provide authoritative texts enhanced by introductions and notes by distinguished scholars and contemporary authors, as well as up-to-date translations by award-winning translators.

Shirley Jackson: Shirley Jackson (1916–1965) received wide critical acclaim for her short story “The Lottery,” which was first published in the New Yorker in 1948. Her works available from Penguin Classics include We Have Always Lived in the Castle, The Haunting of Hill House, and Come Along with Me and Life Among the Savages available from Penguin.

Ruth Franklin is currently working on a biography of Shirley Jackson and is a book critic and contributing editor at the New Republic. She lives in Brooklyn, New York.