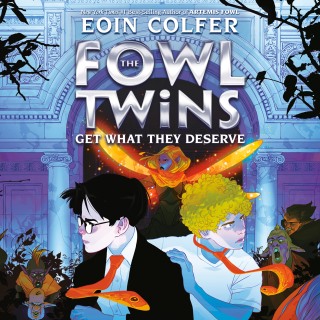 Irish Twins Myles and Beckett, Artemis Fowl's younger brothers, return in their third and most bizarre adventure yet.

For almost two years, Lord Teddy Bleedham-Drye, the Duke of Scilly, has been plotting revenge against the Fowl Twins, who humiliated him in Book One. Teddy plans to give them exactly what they deserve: permanent death.
He threatens Myles with his weaponized jet and Beckett and Specialist Lazuli succeed in disarming the aircraft and causing an accident that kills the duke. But does it really?


Ghosts, clones, and fairy magic come to play in this ultimate and ridiculous showdown between the twins and their worst enemy.

Eoin Colfer: Eoin Colfer (pronounced Owen) is a former elementary school teacher whose Artemis Fowl series has become an international bestseller. He is also the author of The Wish List and the New York Times bestseller The Supernaturalist. He lives in Ireland with his wife and two children. Visit him online at eoincolfer.com.

NATHANIEL PARKER has appeared in several films, including Swimming with Men, The Chronicles of Narnia: The Voyage of the Dawn Treader, and The Bodyguard. On television he has starred in Vanity Fair, Far from the Madding Crowd, and McCallum. His theater credits include Wolf Hall & Bring Up the Bodies, This House, and Speed the Plow, among others. Parker has also narrated many audiobooks, such as the Artemis Fowl series.