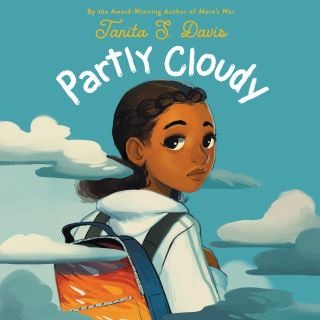 From award-winning author Tanita S. Davis comes a nuanced exploration of the microaggressions of middle school and a young Black girl named Madalyn who learns that being a good friend means dealing with the blue skies and the rain—and having the tough conversations on days that are partly cloudy. Perfect for fans of A Good Kind of Trouble and From the Desk of Zoe Washington.

Lightning couldn’t strike twice, could it? After a terrible year, Madalyn needs clear skies desperately. Moving in with her great-uncle, Papa Lobo, and switching to a new school is just the first step.

It’s not all rainbows and sunshine, though. Madalyn discovers she’s the only Black girl in her class, and while most of her classmates are friendly, assumptions lead to some serious storms.

Papa Lobo’s long-running feud with neighbor Mrs. Baylor brings wild weather of its own, and Madalyn wonders just how far things will go. But when fire threatens the community, Madalyn discovers that truly being neighborly means more than just staying on your side of the street— it means weathering tough conversations—and finding that together a family can pull through anything.

Tanita S. Davis is the award-winning author of six novels for middle grade and young adult readers, including Serena Says, Peas and Carrots, Happy Families, and Mare’s War, which was a Coretta Scott King Award Honor book and earned her a nomination for the NAACP Image Award. She grew up in California and was so chatty as a kid that her mother begged her to “just write it down.” Now she’s back in California, doing her best to keep writing it all down. www.tanitasdavis.com