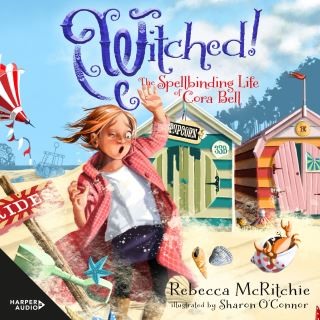 From the talented author of Whimsy and Woe comes the final title in the series about Cora, an orphan who could be magical!

The final fight against magic ...

Cora Bell is racing against time. With her beloved guardian, Dot, badly injured, Cora must face fearsome werewolves, gross beetle worms and a vengeful warlock in order to save her.

But as questions about her long-lost parents arise, Cora and her fairy friends begin a search for the one person who might hold all the answers. The one person who disappeared the same night Cora's parents did ...

Will Cora finally discover the truth about her family? Or will the evil syphon return to finish what he started, and destroy Cora once and for all?

The thrilling conclusion to the magical Cora Bell series.

Rebecca McRitchie: Rebecca McRitchie would love to tell you that she was raised by wolves in the depths of a snow-laden forest until she stumbled upon and saved a village from the fiery peril of a disgruntled dragon. But, truthfully, she works as a children's editor and lives in Sydney. Whimsy and Woe and the sequel, Whimsy and Woe: The Final Act, are her first fiction titles.