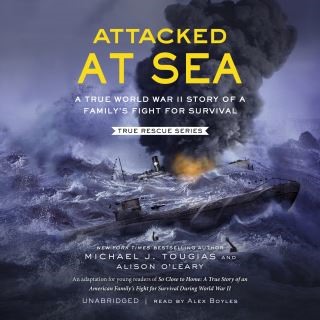 Attacked at Sea is a riveting account of survival at sea, book four in the True Rescue series from Michael J. Tougias, the author of the bestseller The Finest Hours.

On May 19, 1942, during World War II, a German submarine, a U-boat, in the Gulf of Mexico stalked its prey fifty miles from New Orleans. The submarine set its sights on the freighter Heredia. Most onboard were merchant seamen, but there were also civilians, including the Downs family: Ray and Ina and their two children. Fast asleep in their berths, the Downs family had no idea that two torpedoes were heading their way. When the ship exploded, chaos ensued—and each family member had to find their own path to survival.This inspiring historical narrative tells the story of the Downs family as they struggle against sharks, hypothermia, drowning, and dehydration in their effort to survive the aftermath of this deadly attack off the American coast.

Michael J. Tougias is the author of many true rescue stories for young readers and adults, including the New York Times bestselling The Finest Hours: The True Story of a Heroic Sea Rescue; A Storm Too Soon: A Remarkable True Survival Story in 80-Foot Seas; and Into the Blizzard: Heroism at Sea During the Great Blizzard of 1978. A frequent lecturer at schools, colleges, and libraries, Tougias divides his time between Massachusetts and Florida.

Alison O’Leary is an award-winning journalist based in New England. She is a former correspondent for the Boston Globe and the coauthor of So Close to Home and Inns and Adventures.