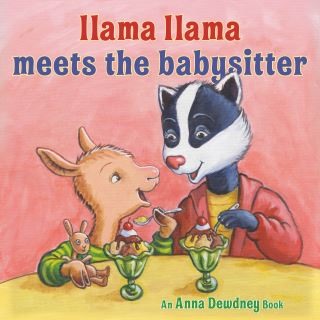 
"I have something new to talk about . . . tonight I will be going out," Mama gently tells Llama Llama.
At first, Llama feels okay with this. After all, Mama has gone out before and Gram and Grandpa have stayed with him. But this time they can't. Someone new is coming over, and the more he thinks about it, the more he worries! He knows he will be miserable . . . and then the doorbell rings. It's Molly from the ice cream store. What is she doing here? And she has ice cream! Maybe having a new babysitter isn't nearly as bad as he thought!

Anna Dewdney: Anna Dewdney was a teacher, mother, and enthusiastic proponent of reading aloud to children. She continually honed her skills as an artist and writer and published her first Llama Llama book in 2005. Her passion for creating extended to home and garden and she lovingly restored an eighteenth-century farmhouse in southern Vermont. She wrote, painted, gardened, and lived there with her partner, Reed, her two daughters, two wirehaired pointing griffons, and one bulldog. Anna passed away in 2016, but her spirit will live on in her books.

Cassandra Campbell is a prolific audiobook narrator with more than 700 titles to date. Winner of four Audie Awards and nominated for a dozen more, she was a 2018 inductee in Audible’s inaugural Narrator Hall of Fame. She has consistently been an AudioFile Magazine Best Narrator as well as a Publisher’s Weekly Best Narrator of the Year. As an acting teacher, she spent five years as a faculty member of the Los Angeles County High School for the Arts and has performed in and directed dozens of plays at theaters across the country.