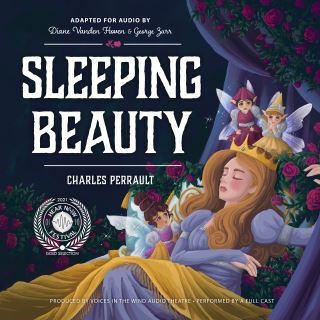 On the birth of Princess Aurora, an evil fairy places a curse on her and declares that before the sun sets on her sixteenth birthday, she will die by pricking her finger on the spindle of a spinning wheel. To protect her from the evil spell, the king agrees to place Aurora in the care of three spirited good fairies who live in a cottage in the woods. One of the fairies conjures a spell so Aurora will fall into a deep sleep instead, to be awakened only by a kiss from her true love.

This dramatized version of Sleeping Beauty features a full cast of beloved characters accompanied by original music and sound effects.

Charles Perrault (1628–1703) was a French author and intellectual. Known as a founding writer of the fairy tale genre, he rewrote numerous folk tales, including Sleeping Beauty, Cinderella, Little Red Riding Hood, Blue Beard, and Puss in Boots. His stories, which continue to enjoy worldwide acclaim, have been adapted to opera, ballet, theater, and film.