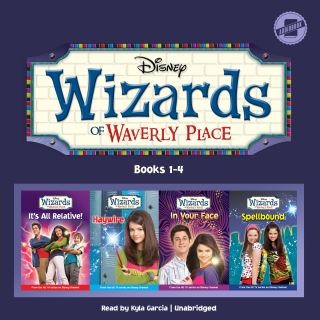 The Russos look like an average family: Mom and Dad run a Manhattan deli, while their kids, Alex, Justin, and Max, deal with school, friendships, and first dates. But things are not exactly as they seem because these kids are all wizards in training! To make things more complicated, only one of them will remain a wizard after the age of 18. Talk about sibling rivalry! This collection includes the first four books in the Wizards of Waverly Place series.

When Alex Russo discovers that her dad has taught her older brother, Justin, how to zoom through the air on the family’s magic carpet, she insists on getting her own flying lessons. But Mr. Russo isn’t quite ready for his little girl to fly, so Justin secretly teaches her how to take to the skies. When their father finds out, will Alex be grounded?

What’s worse than failing your Spanish test? If you’re Alex Russo, then it’s having your parents find out! Now she can’t go on a date with supercute Riley until she passes her makeup exam. But with the help of a Pocket Elf—a tiny magical creature who has in-depth knowledge of every subject—she is able to cheat her way to an A and keep her date with Riley. But her brothers, Justin and Max, decide to team up with the Pocket Elf to teach her a lesson she’ll never forget. Will Alex’s date be memorable, or a major disaster?

Wizards of Waverly Place #3: In Your Face

Justin is head over heels for Miranda, the new girl in his biology class. She’s smart, beautiful, and has even asked him to be her date for the junior prom! Justin couldn’t be more psyched—until he gets a gigantic blemish on his forehead. Alex tries to use some magical mojo to make it disappear, but the spell backfires and brings the zit to life instead! Will Justin be able to hide his talking pimple from Miranda and avoid a bumpy situation?

Alex is shocked when she and her best friend, Harper, are invited to Gigi’s annual tea party. After all, Gigi is never nice to them. But what’s even more surprising is that Harper can’t wait to attend. But then Alex discovers that Gigi’s up to no good. The only trouble is, Harper doesn’t believe her. Suddenly Alex has a decision to make—should she do nothing and hope that the tea party turns out the way Harper expected? Or should she cast a spell to save her friend from major embarrassment?

Disney Publishing Worldwide (DPW) is the world’s largest publisher of children’s books, magazines, and apps, with over 700 million products sold each year. DPW consists of an extensive worldwide books and magazines licensing structure as well as vertically integrated publishing imprints, including Disney-Hyperion and Disney Press in the US and Disney Libri in Italy. DPW’s digital products include bestselling e-book titles and award-winning original apps. Disney English is DPW’s English language learning business, which includes learning centers in China and a worldwide retail-licensing program. Headquartered in Glendale, California, DPW publishes books, magazines, and digital products in 85 countries in 75 languages. For more information visit www.disneypublishing.com.