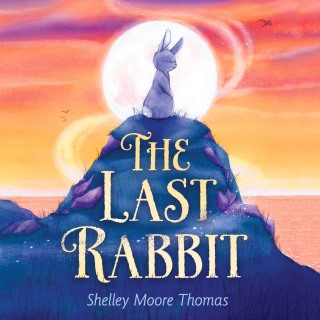 A modern fairytale about sisterhood, forgiveness, and redemption in the vein of The Girl Who Drank the Moon and The One and Only Ivan.

Off the coast of Ireland, on the island of Hybrasil, lives a Magician and four enchanted rabbit sisters. One by one, the rabbits have been leaving the island, accompanied by a Boy and his boat. When the rabbits leave, they can turn back into girls.

The last rabbit, Albie, remains. She doesn't want to leave, but the island is sinking. Before deciding where she wants to go, Albie visits each of her sisters. Caragh has joined a circus. Isolde is the captain of a pirate ship. And Rory wants to go home to the family's house in Cork.

Through many furry twists and hoppity turns, we learn how one mistake can lead to many consequences, and that forgiveness and family are always within reach.

Shelley Moore Thomas: Shelley Moore Thomas grew up in New Mexico, the middle of three children. A fan of fairy tales and UFOs, Shelley began channeling her abundant imagination towards writing back in elementary school. Now an elementary school teacher herself, Shelley spends her days helping the best people on the planet (children, of course!) unlock their creativity. Shelley lives in California with her kids and her dogs. Visit her online at shelleymoorethomas.com, on Twitter @story_queen, and Instagram @storyqueen.