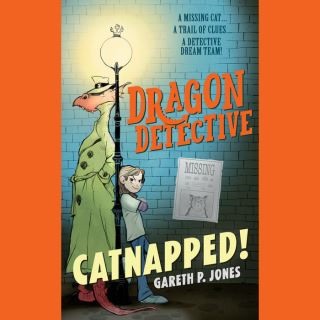 When detective Dirk Dilly gets a call from Holly, a young girl whose pet cat has gone missing, the dragon ends up with not only a new case to solve but also a self-appointed partner-in-solving-crime. And it turns out that Holly's cat is just the beginning! As the pair hunt for clues, Dirk spots other dragons flying over the city - and not the good kind. Dirk has a hunch they might just be involved, but will he and Holly be able prevent further cat-astrophe before it's too late?

The first instalment in a fun and action-packed detective series for fans of TOTO THE NINJA CAT, HOW TO TRAIN YOUR DRAGON and Tom Fletcher's children's books.

Gareth P. Jones: Gareth P. Jones is the author of many books for children, including the NINJA MEERKATS, PET DEFENDERS and DRAGON DETECTIVE series, and THE CONSIDINE CURSE, for which he won the Blue Peter Book of the Year 2012. He lives in south London with his family. Visit www.garethwrites.co.uk | @jonesgarethp