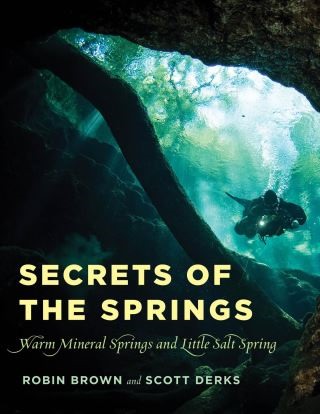 Secrets of the Springs

This tale of two deep springs in Florida that began as sinkholes about 13,000 years ago and the story of the precious water they contained, reveals the recent and prehistoric story of what is now the Sunshine State and the importance of its natural resources to its people.

The mineral-charged spring water sustained Florida's earliest human populations--roaming hunter-gatherers who discovered the springs about 10,000 years ago and revisited them for thousands of years--in dry times and preserved their bones and artifacts for thousands of years. These dramatic tales based on the history of Florida's first people offer new perspectives on Florida's long history.

The second time-period is recent and factual. Often outrageously stranger than fiction, it follows recent events int he history of the springs - the remarkable people who dived in the deep water-filled holes and put together the picture of human life-ways 10,000 years ago at the end of the Pleistocene Era. DNA analysis by world renown Svante Paabo revealed that these first Floridians were unrelated to the Native Americans living in North America today

Robin Brown: Robin Brown is a board-certified microscopic middle ear surgeon who retired from practice in 2000. Beginning 1988, in he has written two books about Florida for adults: Florida’s Fossils, and Florida’s First People, and one for children, The Crafts of Florida’s First People. All three were published by Pineapple Press, all three are still in print and still selling. Robin is writing The Secret of the Springs together with author and friend, Scott Derks. Besides writing books and articles, his continuing interests are small-scale carpentry, making gifts for his seven granddaughters, fabricating fireworks, building and performing magic tricks, and body-surfing in the Gulf of Mexico. His wife Jan was the first president of the Fort Myers Junior league, and Robin and his wife were instrumental in beginning the Fort Myers’ Nature Center. His health is fine despite his 85 years.|||A former reporter for the Fort Myers, Florida, News Press Scott Derks is the author of 19 books on U.S. economic history, including the award winning two volume series The Value of a Dollar, 1600 to 2009. Scott began writing professionally at 17 and quickly claimed the environment and science as a point of emphasis. He has written more than 400 magazine articles for regional and national publications. Co-author of two musicals, he was a banker for 20 years before being named president of a medical foods company, whose focus was essential fatty acids.