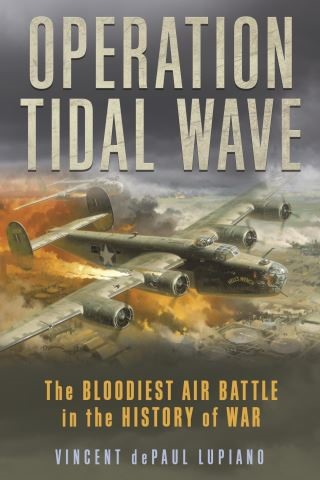 The Bloodiest Air Battle in the History of War

Operation Tidal Wave tells the story of the bloodiest air battle in the history of war. It is about 1700 airmen who set out to bomb the oil refineries surrounding the city of Ploesti, Romania, on August 1, 1943. Success, they thought, would be a force in ending the war. Success instead was extremely limited and 500 airmen were killed, wounded, captured, or interned. Negligible damage resulted at the Ploesti refineries, and a few months later they were operating at one-hundred percent capacity. To show the asperity of the raid, five Congressional Medals of Honor were awarded, two posthumously.

Vincent dePaul Lupiano: Vincent Lupiano is a specialist in corporate communications and speechwriting. For ten years, he was a speechwriter at IBM for senior executives and a script writer/film producer director for IBM corporate films. He was also a senior editor for an IBM management publication.

Vince spent four years in the United States Air Force. During that time, he was an aircraft accident investigator and learned much about airplanes and how the military functions. While stationed at Clark Air Base in the Philippines, he flew several missions between Clark and Vietnam helping to move loads of ammunition. He was writer/producer/announcer at Clark’s Armed Forces Radio and TV station. In this capacity, he flew three combat missions over Vietnam in F4 Phantom and F105 fighter jets, carrying a tape recorder and writing and narrating stories of his experiences for home town radio stations.

He lives in Franklin Lakes, NJ.