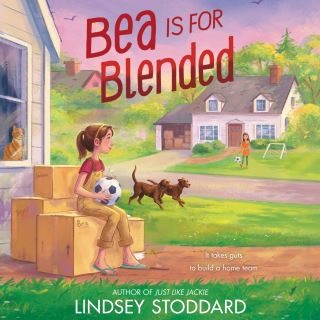 Bea Is for Blended

Girl power scores a goal in this uplifting story of teamwork, new beginnings, and coming together to fight for what’s right—perfect for fans of Lisa Graff and Lynda Mullaly Hunt.

Bea and her mom have always been a two-person team. But now her mom is marrying Wendell, and their team is growing by three boys, two dogs, and a cat.

Finding her place in her new blended family may be tough, but when Bea finds out her school might not get the all-girls soccer team they’d been promised, she learns that the bigger the team, the stronger the fight—and that for the girls to get what they deserve, they’re going to need a squad behind them.

Lauded as “remarkable” by the New York Times Book Review, Lindsey Stoddard’s heartfelt stories continue to garner critical acclaim, and her latest novel will have fans new and old rooting for Bea as she discovers that building a new life doesn’t mean leaving her old one behind.

Lindsey Stoddard: Lindsey Stoddard was born and raised in Vermont. She spent twelve years living in NYC and taught middle school English at MS 324 in the neighborhood of Washington Heights. She recently moved back to Vermont with her husband and two children. Right as Rain is her second novel, following the acclaimed Just Like Jackie.