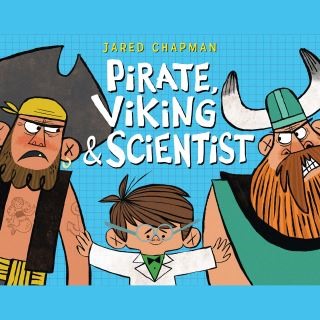 In this funny story that's perfect for fans of Ada Twist, Scientist, a determined little boy won't rest until he proves his theory that you really can have more than one best friend!

Pirate is friends with Scientist.

Scientist is friends with Viking.

Pirate and Viking are NOT friends.

What can Scientist do?

Use his brain, of course--and the scientific method! He forms a hypothesis, conducts an experiment, observes his results, and tests his subjects again and again until he discovers the perfect formula for friendship.

Jared Chapman: Jared Chapman is the creator of Pirate, Viking & Scientist; Steve, Raised by Wolves; Vegetables in Underwear; and Fruits in Suits. He has also illustrated Be Glad Your Dad...(Is Not an Octopus!) by Matthew Logelin and Sara Jensen and Wordplay by Adam Lehrhaupt. He has worked for Walt Disney Television Animation, Nick Jr., Hallmark, and The Hollywood Reporter, among others. He lives in Texas.