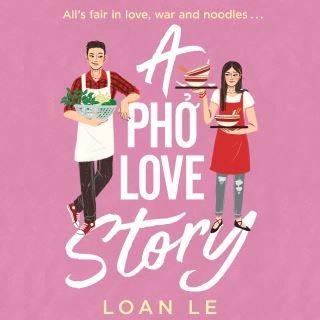 If Bao Nguyen had to describe himself, he’d say he was a rock. Steady and strong, but not particularly interesting. His grades are average, his social status unremarkable. He works at his parents’ pho restaurant, and even there, he is his parents’ fifth favorite employee.

If Linh Mai had to describe herself, she’d say she was a firecracker. Stable when unlit, but full of potential for joy and spark and fire. She loves art, and she dreams of making a career of it one day. The only problem? Her parents rely on her in ways they’re not willing to admit, including expecting her to work practically full-time at their family’s pho restaurant.

For decades, the Mais and the Nguyens have been at odds, having owned competing, neighboring pho restaurants. Bao and Linh have resolved never to befriend each other, for fear of pushing too far and bringing on undue heartbreak. But when a chance encounter brings Linh and Bao closer, sparks fly . . .

Can Linh and Bao’s love survive in the midst of feuding families and complicated histories?

This delicious debut is perfect for fans of When Dimple Met Rishi and To All the Boys I’ve Love Before.

Loan Le: Loan Le holds an MFA degree in fiction from Fairfield University, also her undergraduate alma mater. A Pushcart Prize–nominated writer, her short stories have appeared in CRAFT Literary, Mud Season Review, and Angel City Review. Loan works in book publishing and lives in Manhattan. A Pho Love Story is her first novel. Visit her website at WriterLoanLe.me and find her on Twitter @LoanLoan.