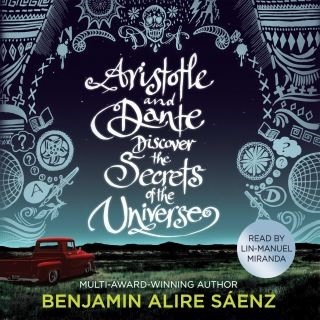 Aristotle and Dante Discover the Secrets of the Universe

The beloved cult classic about family, friendship and first love, from award-winning author Benjamin Alire Sáenz. This lyrical novel will enrapture readers of Adam Silvera (They Both Die at the End), The Perks of Being a Wallflower and Call me by your Name.

Aristotle is an angry teen with a brother in prison.

Dante is a know-it-all who has a unique perspective on life.

When the two meet at the swimming pool, they seem to have nothing in common. But as the loners start spending time together, they develop a special friendship – the kind that changes lives and lasts a lifetime. And it is through this friendship that Ari and Dante will learn the most important truths about the universe, themselves and the kind of people they want to be.

This incredibly moving and powerful Printz Honor Book follows two teen boys learning to open themselves up to love, despite the world being against them.

Benjamin Alire Sáenz: Benjamin Alire Sáenz is an author of poetry and prose for adults and teens. He is the winner of the PEN/Faulkner Award and the American Book Award for his books for adults. Aristotle and Dante Discover the Secrets of the Universe was a Printz Honor Book, the Stonewall Award winner, the Pura Belpre Award winner, the Lambda Literary Award winner, and a finalist for the Amelia Elizabeth Walden Award. His first novel for teens, Sammy and Juliana in Hollywood, was an ALA Top Ten Book for Young Adults and a finalist for the Los Angeles Times Book Prize. His second book for teens, He Forgot to Say Goodbye, won the Tomás Rivera Mexican American Children’s Book Award, the Southwest Book Award, and was named a New York Public Library Book for the Teen Age. He teaches creative writing at the University of Texas, El Paso.