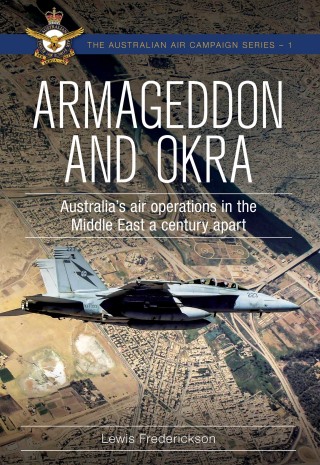 Australia's air operations in the Middle East a century apart

The dispatch of an Ottoman Army by Australian-led Imperial air power in the Wadi Fara on 21 September 1918 occurred just five years after the advent of military aviation in Australia. In 1914, the fledgling Australian air service operated the flimsy Bristol Boxkite; four years later it was flying the far more advanced Bristol F2B Fighter. This leap forward represented a profound progress in technology that has typified the technical development of aviation, particularly in Australia ever since. Ironically, on 21 September 2014, 96 years after the events of the Wadi Fara, Australian squadrons were again deployed to the same part of the world where they would remain for more than three years on operations against extremist terrorism.

Armageddon and OKRA contrasts these events, a century apart, in the context of the development of Australian air power. The book tracks the history where Australia has maintained a balanced air service compelling high technical, logistics and engineering standards, and effective training and command and control systems, for more than 100 years. These processes were as applicable a century ago as they are today. By examining these operational events, the author establishes the connection that access to the technology associated with air power is intrinsically linked to Australia’s enduring foreign and defence policy – more so, that military power is a means to an end, and never an end unto itself.

Lewis Frederickson:
Dr. Lewis Frederickson lectures in the history and strategy of air power as the Chief of Air Force Fellow at the University of New South Wales and Australian Defence Force Academy. As an RAAF Officer Lewis deployed several times to the Middle East Region and particularly enjoyed his service as a Qualified Aviation Instructor. His interests in history, archaeology, literature, society and culture all dovetail neatly with his role as an educator and the themes in the first work of this series. He considers his role in this project to be one of the highlights of thirty years’ service in the Air Force. Today, Lewis is settled in Canberra with his young family where he is continuing with post graduate studies at Oxford University.