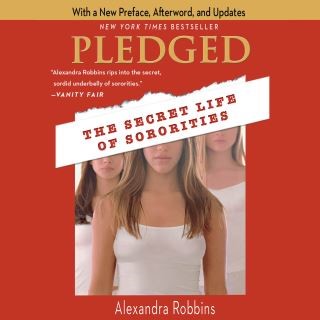 The Secret Life of Sororities

A New York Times bestselling author investigates what life is like for girls living in a sorority and shares an eye-opening and honest reflection of what sisterhood really means.

Alexandra Robbins wanted to find out if the stereotypes about sorority girls were actually true, so she spent a year with a group of girls in a typical sorority. The sordid behavior of sorority girls exceeded her worst expectations -- drugs, psychological abuse, extreme promiscuity, racism, violence, and rampant eating disorders are just a few of the problems. But even more surprising was the fact that these abuses were inflicted and endured by intelligent, successful, and attractive women. Why is the desire to belong to a sorority so powerful that women are willing to engage in this type of behavior -- especially when the women involved are supposed to be considered 'sisters'? What definition of sisterhood do many women embrace? Pledged combines a sharp-eyed narrative with extensive reporting and the fly-on-the-wall voyeurism of reality shows to provide the answer.

Alexandra Robbins: Alexandra Robbins, winner of the prestigious 2014 John Bartlow Martin Award for Public Interest Magazine Journalism, is the author of four New York Times bestsellers, including Pledged and The Geeks Shall Inherit the Earth. She has written for the New Yorker, Vanity Fair, New York Times, and other publications, and has appeared on numerous television shows from 60 Minutes to The Colbert Report.