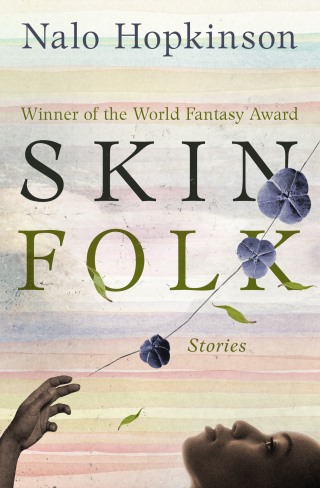 World Fantasy Award Winner: Fiction that “combines a richly textured multicultural background with incisive storytelling,” by the author of The Salt Roads (Library Journal).
In Skin Folk, with works ranging from science fiction to Caribbean folklore, passionate love to chilling horror, Nalo Hopkinson is at her award-winning best spinning tales like “Precious,” in which the narrator spews valuable coins and gems from her mouth whenever she attempts to talk or sing. In “A Habit of Waste,” a self-conscious woman undergoes elective surgery to alter her appearance; days later she’s shocked to see her former body climbing onto a public bus. In “The Glass Bottle Trick,” the young protagonist ignores her intuition regarding her new husband’s superstitions—to horrifying consequences.

Hopkinson’s unique and vibrant sense of pacing and dialogue sets a steady beat for stories that illustrate why she received the 1999 John W. Campbell Award for Best New Writer. Entertaining, challenging, and alluring, Skin Folk is not to be missed.

Nalo Hopkinson:
Nalo Hopkinson is a Jamaican-born Canadian whose taproots extend to Trinidad and Guyana. She has published numerous novels and short stories and occasionally edits anthologies. Her writing has received the John W. Campbell Memorial Award, the Locus Award, the World Fantasy Award, the Sunburst Award for Excellence in Canadian Literature of the Fantastic, and the Andre Norton Award. Hopkinson is a professor of creative writing at the University of California, Riverside. She has taught numerous times at both the Clarion Writers’ Workshop and the Clarion West Writers Workshop. Hopkinson’s short story collection Falling in Love With Hominids will appear in 2015.